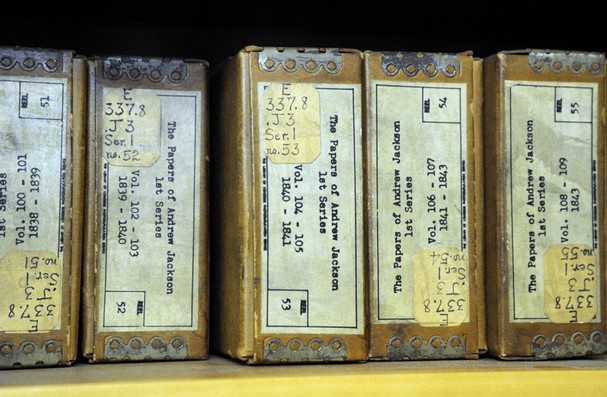 Andrew Jackson’s career and legacies continue to reverberate two centuries after his death.

As the Hero of New Orleans, Jackson became a symbol of American nationalism. As a frontiersman and military commander, he spearheaded the westward expansion of the nation and the subjugation of its Native peoples. As the first westerner and first man of humble origins to reach the White House, he stood as the embodiment of American democracy and the rise of the “common man.” Yet he owned scores of enslaved people whose labor enabled him to prosper.

Jackson transformed American politics by governing in the name of what he called “the humble members of society – the farmers, mechanics, and laborers” against “the rich and powerful.” He remade the president’s role from chief administrator to popular tribune. He also created the country’s first mass political party and fashioned a disciplined party machine featuring the notorious “spoils system” of political reward.

The Papers of Andrew Jackson is a project to collect and publish Jackson’s entire extant literary record.  After an extended worldwide search, the project has obtained photocopies of every known and available Jackson document, including letters he wrote and received, official and military papers, drafts, memoranda, legal papers, and financial records – some 100,000 items in all.  In 1987 the project produced a microfilm edition of 39 reels, including all the new documents that had been found. It also issued a comprehensive Guide and Index, listing every known Jackson item by sender or recipient, date, and microfilm location.

The project is now producing a series of seventeen volumes that will bring Jackson’s most important papers to the public in easily readable form. Each volume presents about 400 documents, fully footnoted and indexed. The plan calls for six pre-presidential volumes, eight presidential (one for each year), three post-presidential, and a cumulative index. Volumes I through XI have been published, bringing the series through 1833, Jackson’s fifth presidential year. Volume XII, covering 1834, is now in preparation.

The Papers of Andrew Jackson is sponsored by the University of Tennessee-Knoxville and supported by grants from the National Historical Publications and Records Commission, the National Endowment for the Humanities, the Tennessee Historical Commission, and the Watson-Brown Foundation.