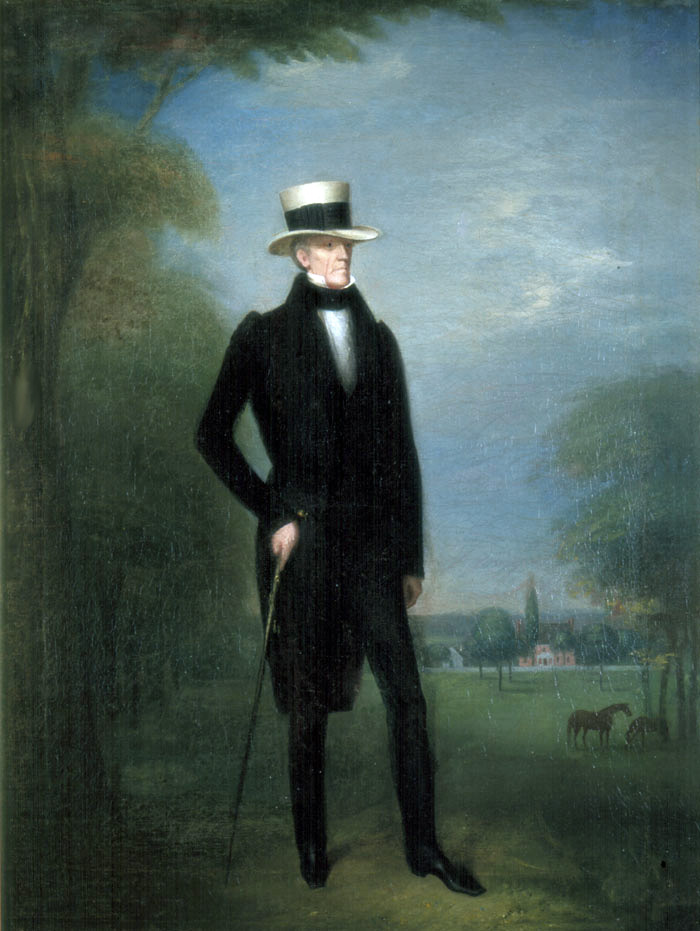 Andrew Jackson, seventh president of the United States, was the dominant actor in American politics between Thomas Jefferson and Abraham Lincoln.  Born to obscure parents and orphaned in youth, he was the first “self-made man” and the first westerner to reach the White House.  He became a democratic symbol and founder of the Democratic Party.  In his two-term presidency, he expanded executive powers and transformed the president’s role from chief administrator to popular tribune.

Jackson was born in 1767 in Waxhaw, South Carolina, to Scotch-Irish immigrants.  He fought as a boy in the Revolutionary War, studied law, and in 1788 moved west to Nashville.  In 1791 he began living with Rachel Donelson Robards, whose husband had abandoned her.  They were formally married after her divorce in 1794.  Charges of adultery arising from the episode dogged Jackson’s later political career.  After serving as Tennessee prosecutor, judge, congressman, and senator, he won fame as a Major General in the War of 1812 with overwhelming victories against the Creek Indians in 1814 and the British at New Orleans in January 1815.

Jackson’s triumph at New Orleans quickly became the stuff of legend and made him America’s greatest military hero since George Washington.  In 1818 he led an army in pursuit of Seminole Indians into Spanish Florida, touching off an international furor.  After Spain ceded Florida, Jackson served briefly as territorial governor and was then senator from Tennessee in 1823-25.  In a confused, four-candidate presidential race in 1824, Jackson led the popular and electoral vote but lost in the House of Representatives to John Quincy Adams through the influence of Speaker Henry Clay.  Jackson challenged Adams again in 1828 and defeated him, in a campaign which centered on Jackson’s image as a man of the people battling aristocracy and corruption.  In 1832 he easily defeated Henry Clay.

Jackson carved out a stronger role for the presidency.  He replaced many government officials on partisan grounds, inaugurating the “spoils system.”  Catering to his core regional constituency of Southern planters and Western frontiersmen, he condemned antislavery activism, favored cheaper public lands, and strong-armed Indian tribes into removing west of the Mississippi.  In a confrontation between Georgia and the Cherokee Nation, Jackson backed state authority against tribal sovereignty and refused to protect Indians’ treaty rights despite their recognition by the United States Supreme Court.  Jackson wielded executive powers vigorously, defying Congress, vetoing more bills than all his predecessors together, and frequently reshuffling his Cabinet.

Two additional episodes defined Jackson’s presidency: the nullification crisis and the “Bank War.”  Jackson took office amid mounting sectional acrimony over the “American System” program of fostering economic development through transportation subsidies and through protective tariffs on imports to aid American manufacturers.  Many Southerners believed these policies promoted Northern growth at their expense.  Jackson curbed the American System by vetoing road and canal bills beginning with the Maysville Road in 1830.  However, in 1832 the state of South Carolina declared the existing tariff unconstitutional, null and void.  The state took steps to block tariff collections within its borders.  Though he favored a lower tariff, Jackson acted quickly to uphold federal supremacy by force if necessary.  In a ringing proclamation, he declared the Union indivisible and branded nullification as treason.  Congress reduced the tariff in 1833, defusing the crisis.

The Second Bank of the United States was a corporation 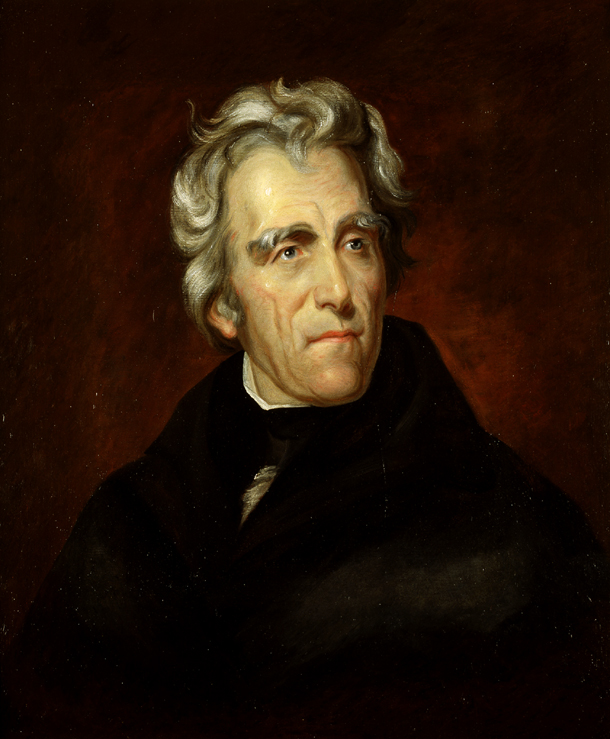 chartered by Congress to provide a national paper currency and manage the government’s finances.  Like Thomas Jefferson, Jackson believed such a bank to be dangerous and unconstitutional.  In 1832 he vetoed a bill to extend the Bank’s charter beyond its scheduled expiration in 1836.  Jackson’s veto message counterposed the virtuous plain people against the Bank’s privileged stockholders.  The next year Jackson moved the federal government’s deposits from the Bank to state-chartered banks, triggering a brief financial panic and prompting the Senate to censure him in 1834.  Undeterred, Jackson launched a broader assault against all forms of government-granted privilege, especially corporate charters.  His Farewell Address in 1837 warned of an insidious “money power.”

Jackson’s Bank War and its populistic, egalitarian rhetoric shaped the platform and rhetoric of his new Democratic party. (His policies also arguably helped trigger a financial panic in 1837, which deepened into a severe depression.)  By casting himself as the people’s tribune against the moneyed elite and their tools in government, he introduced an enduring theme in American politics.

Strong-willed and sharp-tempered, a fierce patriot and rabid partisan, a slaveholder and staunch unionist, Jackson was always controversial, both as a general and as president.  He personalized disputes and demonized opponents. In a notorious episode, Jackson broke open his first Cabinet and forced a rupture with Vice-President John C. Calhoun by championing the character of Peggy Eaton, the wife of the secretary of war.  Yet behind Jackson’s towering rages often lay shrewd calculation of their political effects.

Jackson secured the presidential succession in 1836 to his faithful lieutenant and second vice-president, Martin Van Buren. He then retired to The Hermitage, his cotton plantation near Nashville, where he died in 1845.

Cole, Donald B. The Presidency of Andrew Jackson. Lawrence: University of Kansas Press, 1993.